We’ve just released Loupe 4.6 for download. The main features of this release are significant UI updates to Loupe Desktop and defect fixes & feature tuning to Loupe Server. You can Download the release right away or Read the Release Notes for a complete list of enhancements and fixes.

We’ve ported a workflow introduced in Loupe Server 4.5 back to Desktop, with some twists unique to how Desktop is used. When viewing a session from a Loupe Server it will display the events from the server, let you drill from the event to the occurrences in the current log, and then for each occurrence display the messages leading up to that event. This is designed to quickly get to the root cause of any problem based on the contents of your logs. 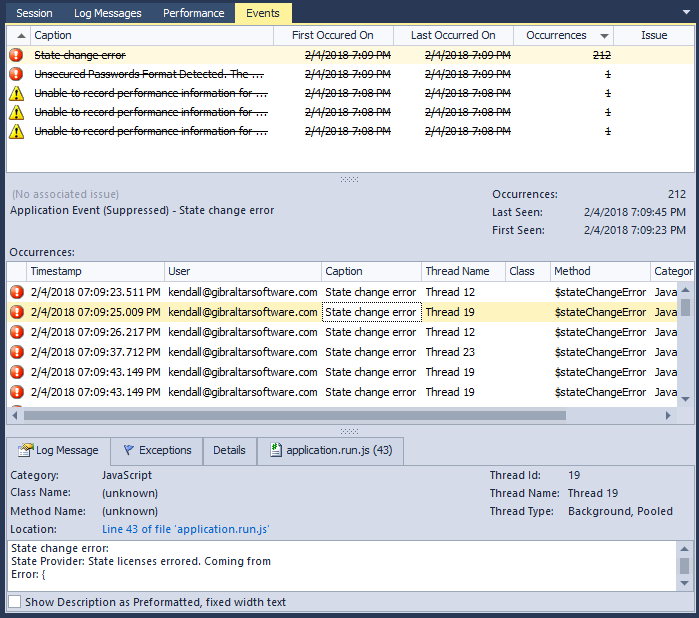 Just select the Events tab in the Session Viewer and you’ll see the list of events up top, select an event and see all the matching log messages in the current log, and pick one of those occurrences to see the details for it. You can even click Inspect Message on the toolbar to see the log messages leading up to the problem without having to filter or sort the main log. 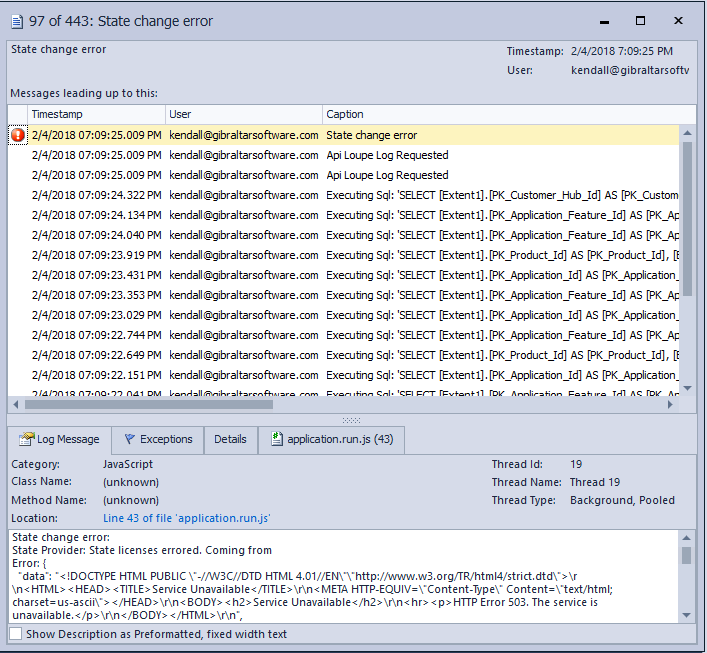 We’ve modified the UI layout manager for the Desktop Session Viewer to be more Visual Studio-like including collapsible content areas to help users with narrow screens. We’ve extended the filtering options to support directly selecting a single user or thread for multi-user and multi-threaded applications along with a text match filter to subset the log to just messages that contain the provided string. This makes it simple to find every log message for a transaction Id or other reference number or view the activity for a single user.

Loupe Server’s Web UI was upgraded for high DPI & retina support in Loupe 4.0 and now it’s Loupe Desktop’s turn. With more and more developers using high DPI displays routinely it was time to make sure Desktop didn’t just work on those displays (it has for a while in compatibility mode) but took advantage of them.

We’ve enabled per-screen display scaling in Loupe Desktop which means higher DPI screens (like 4K screens or the Surface Pro) will see content rendered using the screen’s native DPI instead of the historical 96 DPI. For this initial version with High DPI support the goal has been that all views work without content being cutoff or inaccessible. Several graphical elements (e.g. icons on toolbars or in grids) haven’t been updated with high resolution equivalents; this will be done in a future update.

You’ll notice fonts are rendered more finely, displaying more data on the screen than before. Lines and spacing are sharper, charts and graphs display more information more crisply. All in all, it’s a solid improvement that we’ll build on for Loupe 5.

Loupe Server hasn’t been left behind in this update. We’ve significantly improved the log viewer on the server to have a more natural scrolling experience even when working with very large log files. Like Loupe Desktop, you can go from an event to the specific occurrences in a single log to the messages that lead up to that occurrence.

To further improve Loupe performance for our Loupe Enterprise customers we’ve fully separated the web static content from the back end API. Enterprise customers can now easily deploy the static content (no license required) to a Content Distribution Network or other high-caching distributed environment while having their Loupe data centralized. This can significantly improve startup time for remote users and improves performance of moving between repositories hosted in different environments.

Loupe Cloud-Hosted has been using this capability since this summer when we rolled out App.OnLoupe.Com as the main entrance point for Loupe - a purely static host that we accelerate world wide with CloudFlare. This talks to our API back end which is not cached.

This is our last scheduled update for Loupe 4. We began development of Loupe 5 last August and are charging ahead to ship the first beta in the next few months so we can start getting feedback on it. Before we completely turned our attention to this major release we wanted to ship the best update possible for our existing users.

Kendall Miller is one of the founding partners of Gibraltar Software. Before starting Gibraltar Software, Kendall worked for multiple startups leading their technology development from beginning through profitability. In each case he's focused on translating enterprise-level performance and capabilities down to smaller companies.

Rapidly diagnose each error in any .NET application with our new Web Log Viewer and Exception root cause analysis, new in Loupe 4.5. New integration with Azure Service Bus and Azure Search enables full Loupe functionality without any Virtual Servers in Azure. Read more

With Gibraltar 2.5 you can receive text or HTML-formatted messages when important events are reported. The messages are pretty and we've worked hard to make sure you won't get flooded when something goes wrong in an app you monitor. They're easy to configure and are generated automatically on the Server... Read more

You know what you should be logging, and you know your logging framework. But do you know what data you should include in those logs? In this article, we will look at some real logs, their data, and discuss how the log sink can affect the data requirements for effective... Read more